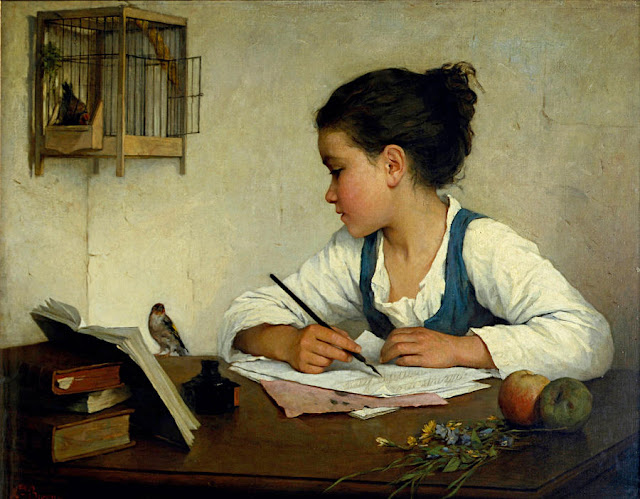 This humorous list has made its rounds on the internet for quite a few years. I'm sorry to say that I don't know who the original author is. I may have added one or two items myself. I can't remember now. :-)

2. Prepositions are no words to end sentences with.

6. Parenthetical remarks (however relevant) are unnecessary.

Evening Song - What Kind of Man?


2 Peter 3:9 The Lord is not slack concerning his promise, as some men count slackness; but is longsuffering to us-ward, not willing that any should perish, but that all should come to repentance.

Hebrews 12:2-3 Looking unto Jesus the author and finisher of our faith; who for the joy that was set before him endured the cross, despising the shame, and is set down at the right hand of the throne of God. For consider him that endured such contradiction of sinners against himself, lest ye be wearied and faint in your minds.

Angel Trumpets - near Kingston, Tennessee
Posted at 1:00 AM No comments:

Hard Questions - Is It Your Christian Duty to Vote?

This article was first posted in 2016. I had planned something else for today, but after revisiting this it seemed like maybe it was time to put it up again since the elections in the U.S. are fast approaching again. I edited it and made a few changes.
---------------------

Is It Your Christian Duty to Vote?


Micah 6:8 He hath shewed thee, O man, what is good;
and what doth the LORD require of thee, but to do justly,
and to love mercy, and to walk humbly with thy God?

This was an article that I wasn't sure I wanted to write this year (2016). There has been so much said by so many that I hesitated to add my thoughts as it seemed like there was too much already. The thing that made me reconsider is all the drama I've seen and heard about how it is supposedly the American Christians' duty before God to vote. The misuse of scripture in some instances has bothered me. Added to this is the overwhelming pressure that various Christian people and groups are putting on others to try to force them to vote for the person they deem to be "the right one." In the hopes of helping a few people get a little peace about this, I decided to venture forth into a topic that is generally odious to me. So, here we go.

American Christians have been told for years that it is their "duty to vote." The preachers, pastors, and evangelists have stomped up and down this country in and out of election years, telling people that if they don't vote for  the "right" candidate (meaning the one of that man's choice) or for a specific issue then it will be their fault when this country goes to the devil. Prohibition was passed largely based on this type of pulpit politics, and after some years and total failure, it was repealed and, strangely enough, we are not all drunkards now. (Yeah, the nation is a mess, but you can't honestly blame all of this on alcohol.)

Coxcomb
Posted at 1:00 AM No comments:


Temple Grandin, the lady famous for being one of the first diagnosed with autism and then going on to become a well-educated, functioning, contributing person, talks here about autism and things that can be done to help children who have it. As a person who is highly artistic and also suffers from an anxiety disorder, I feel very strongly about art and hands on creative things being removed from school curriculum. I also hope this gives someone a better understanding about helping children and adults with autism and related disorders.

God allows some things for reasons that we do not understand. Through history, many of the great artists and highly skilled people in special areas such as mathematics, linguistics, music, technology, and other things have been or are somewhere on the autism spectrum. Helping children with autism find the things they are good at and helping them increase those skills is very important. For Christian parents, you may help them find that one thing or those few things that they can do that will be truly productive to God's glory and give them a sense of being useful in this life. This is important for everyone.

Also, as a side note, I agree with Ms. Grandin that it is wrong to breed animals for food or our enjoyment in such a way that they suffer or have problems. Proverbs 12:10 A righteous man regardeth the life of his beast: but the tender mercies of the wicked are cruel.

I do not remember there being any profanity or using of God's name in vain in this video. If I have missed something I apologize. Please leave a comment.

I have no control over ads or suggested videos.
Posted at 8:21 PM No comments:


Our earthly homes are simple things
Of plaster and of board;
Sometimes as humble as the nest
Built by a wildwood bird.

And yet through all our lives our hearts
Cling to the childhood home
Of hallowed, precious memories -
No matter where we roam.

Evening Song - I Am Sure that He Loves Even Me


John 15:13 Greater love hath no man than this, that a man lay down his life for his friends.

2 Thessalonians 2:16-17 Now our Lord Jesus Christ himself, and God, even our Father, which hath loved us, and hath given us everlasting consolation and good hope through grace, Comfort your hearts, and stablish you in every good word and work.

Thousand Word Project - Flowers for the End of Summer

Directions:
In a deep pan, combine soup, water, and butter; bring to boil, stirring occasionally. Add kielbasa and rice; reduce heat; cover and simmer for 15-18 min.(or until rice is almost tender) stirring occasionally. Add liquid if required. Stir in peas; cover and simmer an additional 10-15 min. or until rice is soft and peas are cooked through. Sprinkle with cheese; cover till melted makes 4-6 servings

Note: If you double up on the recipe you have a terrific dish for any group gathering.

-- Thanks to Yvonne
[edited]

Editor's Note: There is organic cream of mushroom soup available now that has better ingredients than the usual varieties. Having several family members with MSG intolerance, this is a big deal for us.
Posted at 10:19 AM No comments:

It Is not Death to Die

It Is not Death to Die


It is not death to die,
To leave this weary road,
And, 'midst the brotherhood on high,
To be at home with God.

It is not death to close
The eye long dimm'd by tears,
And wake in glorious repose
To spend eternal years.

It is not death to fling
Aside this sinful dust,
And rise, on strong exulting wing,
To live among the just.

Jesus, Thou Prince of life!
Thy chosen cannot die;
Like Thee, they conquer in the strife,
To reign with Thee on high.

Philippians 1:21-24 For to me to live is Christ, and to die is gain. But if I live in the flesh, this is the fruit of my labour: yet what I shall choose I wot not. For I am in a strait betwixt two, having a desire to depart, and to be with Christ; which is far better: Nevertheless to abide in the flesh is more needful for you.
Posted at 1:00 AM No comments:


Psalm 71:22-23 I will also praise thee with the psaltery, even thy truth, O my God: unto thee will I sing with the harp, O thou Holy One of Israel. My lips shall greatly rejoice when I sing unto thee; and my soul, which thou hast redeemed.

Wild sunflower of some type.

Taken in Central Texas.
Posted at 1:00 AM No comments: