Things that happen in my kitchen: Moving In

When we moved to Texas my parents and then-fiancé, Peter, moved into this house (bought by Peter) while I went to live next door with my brother and sister-in-law temporarily. (Really, I mostly just slept there, though I did hang around their house some days.) Later, when we got married, my parents and I switched places, and eventually my parents put up a mobile home on our property. We were not able to move here as soon as we bought the place, so my brother and his wife, Sarah, took care of the place for us for a time. Sarah did some cleaning here during that time, among other helpful things. I have been so thankful that she did what was really a “pre-cleaning” for me before we came! There was still so much crud left behind by the former residence that if she had not managed to remove the first layer I’m afraid I would have rebelled at the idea of living here – or having my family move in here! :-( (Sarah knew I would want to reclean some things, but she was not aware of the extent of some of it; in fact, I wasn’t either. I found stuff I hadn’t seen before even quite sometime after we moved in here because it was camouflaged or in some out-of-the-way spot.)

Now, I am not a pristine housekeeper. My mother is not and her mother was not. We believe a house should be lived in, and not kept as a show piece. We have a fair tolerance for dusty dirt and a bit of clutter, at least in our own houses. ;-) As long as it isn’t greasy grime, boogers-on-the-wall, piles of clutter or germy type dirt we aren’t too worried about it. But, as my Gramma would have said, “There are limits!”

Sarah removed a goodly portion of dusty dirt and surface crud, but it was the ignored, caked on, been-there-awhile type stuff that was disturbing. The dining room window was be speckled with food. The carpet is still liberally stained from human error and untrained animals – messes that no one apparently bothered to try to clean up in a timely manner. (My brother, Mike, had the carpets cleaned, but the stains came back – and, the sad thing is that it’s still good carpet.) In one place there is a hole – under the carpet – clear through the particle board floor where someone apparently spilled water and made no effort to clean it up. It still makes me wonder sometimes when I stop to consider the condition of the carpet and other various things we found! (Although, I’m sure the lady who cleaned the house we moved out of had a few things to wonder over as well!)

A mouse had also gotten into the kitchen and decided it was a nice condominium sometime not long before we arrived, unbeknown to Mike and Sarah. The droppings here and there didn’t add to the overall attraction of the place. It even had gotten into the fridge, which was propped open to keep it from stinking!

Anyway, thanks to the help of my friend, Elisabeth, the kitchen got a very deep cleaning before we moved a lot of stuff in! I am very grateful for her help and diligence in getting the deeper and more stubborn crud subdued. Here are a few pictures of us at work on that “almost-first-thing” that happened in my kitchen. (Sorry to say, I have no photo record of Sarah’s efforts.) 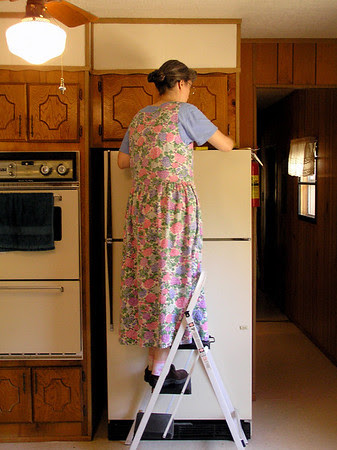 Here I am cleaning up the top of the fridge. 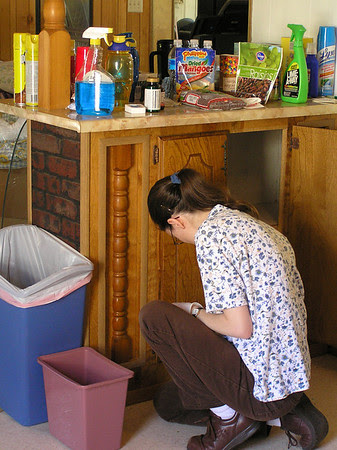 Here is my friend, Elisabeth, giving a cupboard a good cleaning. (Notice the disarray on the counter – cleaners, Lysol, snacks, some kind of supplement, dry beans, dental floss, bottled water, etc. Oh, the joys of moving!) 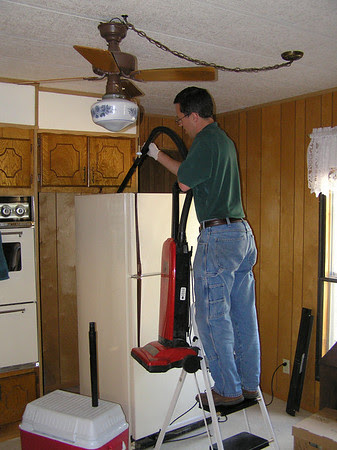 Here is Peter cleaning the top of the fridge for me. :-) 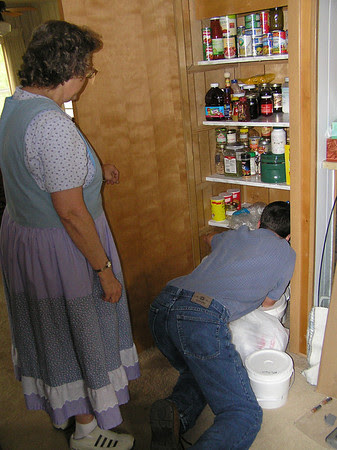 Here my mom and Peter are working on organizing the pantry and putting away the buckets at the bottom. It was a work in progress because it took me a while to figure out where I wanted and needed everything. Our friend Mrs. M. loaded a lot of the stuff into the pantry for me, which was helpful. 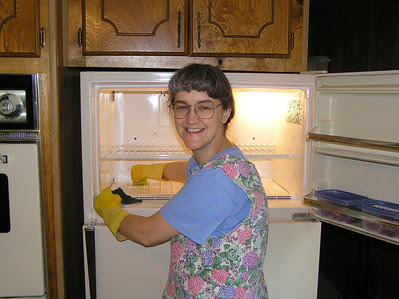 There were many others who helped with the moving process. I’m very grateful to all the folks who helped us move into our “new” house! It was a blessing from the Lord to have so many helping hands.

Here are some helpful links for fixing up cooking mistakes and using messed up or imperfect food items. (Disclaimer on ads and some content.)

A Longer List of Useful Tips (a few repeats)

A Few More Tips (not all on the other pages)

Have a great day honoring your fathers and the fathers of your children, ladies! :-)  May God bless the Christian fathers with His wisdom, strength and grace!

Here is a picture of my Daddy and Mom the day their new house was delivered – the first new house they ever had! (It was taken at night.) 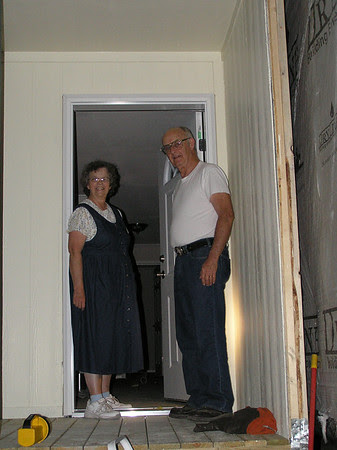 This came from my friend, Venessa. The blog is written by the church cook where they fellowship. There are some pretty fancy recipes here! Some look easier than others.

My family lived in Ethiopia for a short time when I was a very small. My parents learned to cook the food and it has been a special and important part of our family life ever since. Here is a web page that offers variety of Ethiopian recipes. The biggest trick to successful Ethiopian food is getting authentic spices (especially the beriberi) and rendered butter (done and spiced according to the Ethiopian method). If you have an Ethiopian restaurant near you, you may be able to purchase at least some of these things from them. (Note: I did not watch the video that is on this page, so I don’t know what the content might be like.) 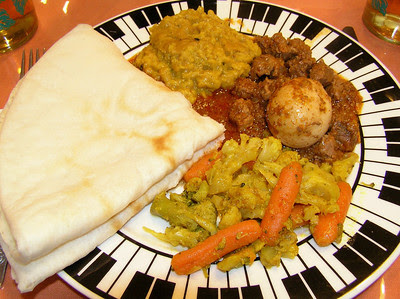 This is an Ethiopian meal we made! :-)

Happy Birthday to my favorite baker and cook!

In honor of my husband’s birthday I wanted to post some pictures of him cooking and baking. He had learned to cook some before we got married, but since then he has worked hard to improve his skills. In fact, he insists on cooking breakfast for us every Sunday. :-) He has become quite talented, especially as a baker! 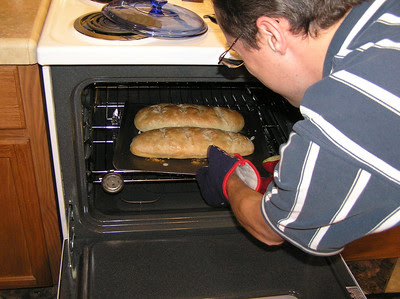 Peter’s first effort at French bread, made for our Thanksgiving dinner last November. This was in my Mom’s kitchen. 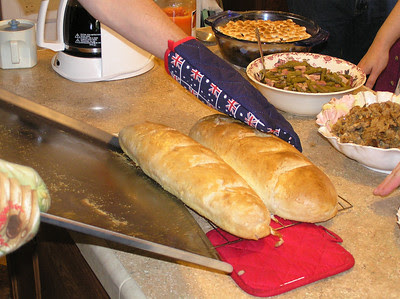 They turned out very well and were delicious! 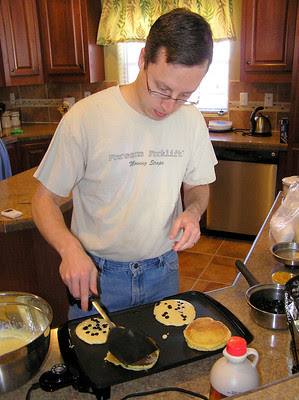 Here he is making pancakes at my brother and sister-in-law’s house. This was our first meal together with them in their new house! :-) (He has added blueberries to the pancakes before turning them. He also did some with chocolate chips. Very yummy!) His pancakes are very good. 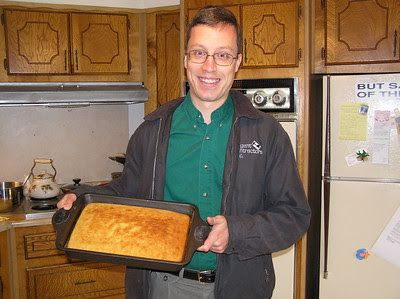 Here’s Peter with the yellow cake he made from scratch for my mom’s birthday and my brother and sister-in-law’s anniversary on January 1st, 2009. I made some chocolate frosting for it which we added later. (This is our kitchen.) 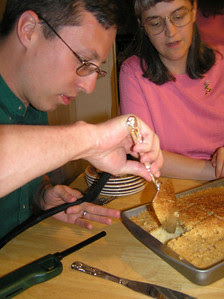 Peter and me with the cake he made for my birthday in April of 2009. It was Lazy Daisy Cake. 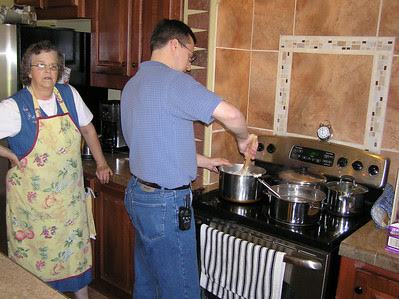 Helping my mom in my sister-in-law’s kitchen in April of 2010. (Notice my mom’s apron. It’s lasted for years!) 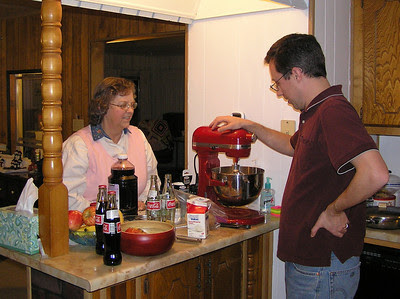 And, finally, learning to make whipped cream with Mom’s help. (Our kitchen, Jan. 2010.)

In honor of National Egg Day I thought I’d post a photo of eggs from our own free range chickens. The “girls” are real rascals sometimes, but they do know how to lay a fine egg! 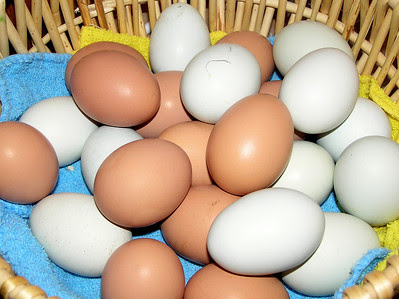 The eggs that look white are actually pale green-blue. They are from our Ameraucana chickens.