Most of my “recycling” efforts really fall under the category of reusing.  I grew up in a “poor country preacher’s” home.  The churches my dad served were small and generally not able to offer a lot of financial support.  So, my dad worked on the side, and my mom made everything go as far as possible.  Both my parents did.  They were also both efficient at finding bargains and getting to them “before the hoarders got there”, as their little joke went.  You see we were the “hoarders” in those days.  Not because we were afraid of the future or just wanted stuff, but because when we found food we used, needed or especially liked at a rock bottom price we bought in quantity and froze, stored or canned it.  This is how my mom managed to feed a family of six on such a low income.  In fact, we ate quite well considering our “economic bracket”!  But, they couldn’t have managed at all if God hadn’t been so gracious to them.  He helped them in these endeavors over and over in so many ways!  It was truly amazing and we praise Him for it!

My parents and grandparents were all missionaries in Africa as well.  This made for an interesting life of making do with what they had.  Back when the first ones went out (before WW II) things were still quite primitive in some places they lived.  It was not “pioneering missions”, but they really roughed it sometimes.  They all learned the value of reusing things in a big way, believe me.  This was not always to the best advantage later as some things that were saved as really useful on the African mission field were not particularly useful things to save in the U.S. – such a tin cans, which in East Africa were at one time traded for eggs, but here were almost useless except for some very particular situations.  (Note: Large cans with sealing lids, though rare these days, can be useful for some purposes, but lets not save every single one! :-)  An important part of reusing is learning where to draw the line and not go overboard.)

I would like to share a few of the things I’ve been able to “reuse”. [Later development: I intended to start a series called "That Old Thing" but, as it turned out, I didn't.  So, if you are interested in repurposing and reusing things, please see the new series "Shop Your Own Stuff".] 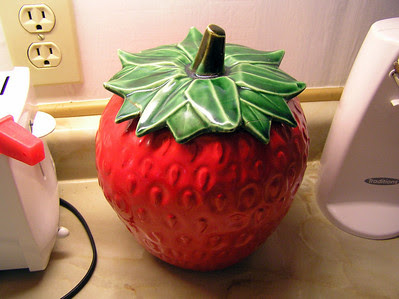 Some people might think it’s pretty nice, but in fact it has some cracks and is showing it’s age.  Even in this picture you can see a couple of the repairs on the lid (done by my dad or a former owner).  Also, I am pretty sure that someone used it for potting a plant at some point because there was dirt in the bottom of it when I first got it and it was quite dirty.

My dad actually gave this to me.  He bought it somewhere second hand to resell since it is a 1950’s era “real McCoy”, but it was not in great condition.  The lid may be from another cookie jar even.  He knew I like strawberry stuff, so he offered it to me, very kindly. :-)

Anyway, what do you use a cookie jar for that has been used to pot plants? Ugh.

It took some work, but I finally got the years of caked on grime pretty much scrubbed off.  Since I had a newer, cleaner cookie jar in a similar shape, I didn’t really need it for cookies.  I ended up storing garlic in it.  It isn’t air tight, so the garlic can “breath”, and it’s former “life of grime” is not an issue.  :-)  Reused!

(Note: The other cookie jar actually serves as a cracker holder – packaged crackers that won’t be effected by the air leaks.  I don’t consider these kind of cookie jars to be that great for storing cookies, unless they have a rubber seal, since the cookies tend to go stale quicker.  I store mine in sealed containers.  Just for what it’s worth.)
Posted at 3:00 PM