Gramma In An Apron 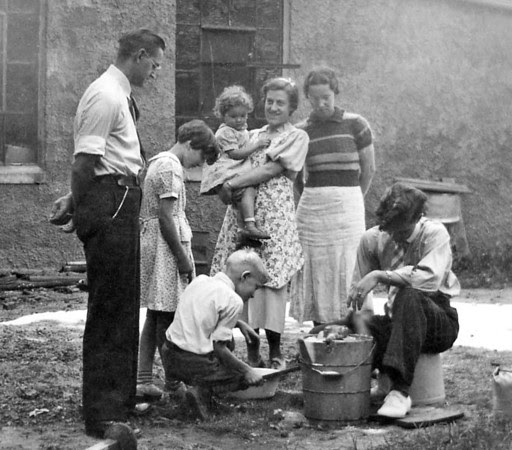 Here is one of the few pictures I have of my Gramma Hoover wearing an apron.  This picture was taken before my grandparents were married.  Grandpa is on the far left and Gramma is in the middle holding the toddler.  They were churning ice cream the old fashioned way (for those of you who don’t recognize this) with some family members.
Aprons were an important part of Gramma’s life, as they are in mine.  I remember her wearing them quite often when she was cooking.  Unfortunately she was pretty consistent in remembering to take it off before a picture was taken, or it was under the table where it couldn’t be seen.  She wore mostly half aprons in later years when I was old enough to remember.  I don’t know why for sure, because half aprons don’t really protect the most vulnerable area for cooking.  But, as you can see I came by my love of aprons quite naturally.  The one she was wearing here looks like a pretty floral print – just my style. :-)
February 21 was my Gramma’s birthday.  Gramma is still an important part of my life.  She passed on many sayings, a lot of advice and wisdom, a love of wholesome books, her fashion sense and so much more. She also was (and is) a dear friend, not just my grandmother.  I look forward to being with her again in Heaven!
Posted at 8:45 AM